iBeacon and Battery Drain on Phones: A Technical Report

Apple’s iBeacon is set to revolutionize how we interact with physical spaces via our phones. These little “beacons” advertise their location periodically. This in turn allows our phones to sense them in the environment and determine our precise location within any space providing us a highly personalized, location driven experience. But to use iBeacons, our phones need to do extra work to sense them, investing energy that subsequently causes battery drain. In this report, we analyze the battery use for this purpose across phones and chipsets in great detail.

Highlights of this report are:

iBeacons are essentially Bluetooth low energy (BLE) transmitters. While Apple introduced the concept in mid-2013 for enabling location services driven by iBeacon, the underlying BLE technology has been around for several years and well supported by Android since version 4.3. In this report, we use the terms BLE, iBeacon, and beacon interchangeably.

iBeacons emit (advertise) a low-power signal several times a second. To use these beacons, a phone must scan for all nearby BLE devices. The phone can scan very frequently (say, every second) or only once in a while (e.g., every 30 seconds). Different scan frequencies have varying impact on the battery life as we explore in this report.

We say that a mobile app (phone) has a duty cycle of X% on a scanning interval Y if the app performs a BLE scan every Y seconds for X% of the time (and subsequently does not scan for BLE signals (100-X)% of the time). Thus a 50% duty cycle at 1 second, means that the app scans for BLE signals for 1 second and performs no BLE scan for the next second. Notice, 50% duty cycle at 0.1 second would mean 5 times more the number of scans than 50% duty cycle at 1 second (even though, a single scan only lasts 0.1 seconds). Both number of scans and the time interval of each scan affect battery consumption.

In this report we analyze the impact of duty cycles, scanning intervals, and beacon advertising intervals on power consumption of a phone nearby. In order for BLE beacons to enjoy vast adoption their battery impact should be minimal. Our analysis covers a wide range of chipsets and phones.

We focus on Android as it allows us to experiment with different scanning parameters (an iPhone report will be published next). This is the first in a series of studies that will shed light on beacons for different smartphone operating systems, different beacon technologies and different beacon usage scenarios. We examine three different generations of Android handsets running Android 4.4.2, a Nexus 4 a Nexus 5 and a Moto G. While we experimented on several different phones, we report numbers for these three handsets as they are representative of very old, old and newer chipsets. We wrote an application to conduct our tests and collect battery statistics. No other application is running in the handsets (modulo those required by Android to operate). There is no GPS or 3G connectivity enabled. All phones start from the same state, being 100% charged. In what follows, we vary several parameters and observe the impact to the battery consumed by the headsets.

Impact of the number of beacons on battery drain

The first experiment studies impact on battery as we change the number of beacons around the phone. With more beacons, the phone scans more signal (even though the Bluetooth radio is ON for the same amount of time). The table below shows battery drain per hour.

Drain increases with the number of beacons even though the underlying radio is turned on and off at the same schedule. The chip has to conduct more work to recognize and process more signals. In addition, older handsets with older BLE chips (Nexus 4) exhibit larger drain, than newer handsets which are a lot more efficient. Note: Nexus 4 at 10 beacon signals crashes due to a bug in the BLE implementation on the phone. For the new handsets, even aggressive BLE scanning at 10 beacons drains only slightly more than double the battery per hour than normal (no BLE scan). Given that in a practical implementation scanning would not be as aggressive, this means that the battery impact of BLE scan on the new handsets in minimal. This is however not the case for older handsets. With 10 beacons, Nexus 5 battery consumption is 9x the baseline, whereas the same for Moto G is more modest.

Take away message: The number of beacons in the surrounding impacts the battery significantly. Newer handsets are however optimized for this and the battery impact is minimal.

In this experiment we study the impact of the scan interval length to battery drain. At a fixed duty cycle, say 50%, a 0.1 second scan interval conducts five times as many BLE scans as at 1 sec scan interval. Note, in both cases, the amount of time the phone is scanning is the same (5 seconds ON and 5 seconds OFF in any 10 seconds) but the number of times the phone switches from Bluetooth ON to OFF is different. We study the impact on battery of a small versus a larger scan interval. For these experiments seven beacons are present and we employ a 50% duty cycle. Table below shows battery drain after 8 hours.

Next, we vary the duty cycle and study the impact on battery drain. The table below shows battery consumption after 5 hours. 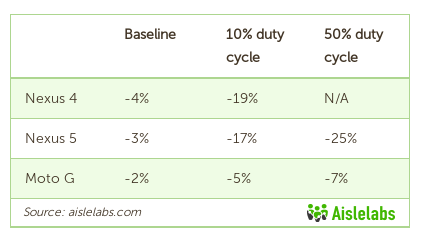 Take away message: Duty cycle has modest impact on battery life, and batteries on newer handsets are minimally affected even with aggressive scanning.

Multiple detection of a beacon within the same scan is desirable as it aids in smoothing the signal readings. These signal readings are critical to assessing the precise distance of the beacon from the phone. At the same, multiple signals mean more work required to process the signals, and hence more battery consumption.

In our experiments, as we reduced the advertising interval of the beacon, we noticed modestly higher battery use for our three handsets.

This section has raw charts from our experiments. Model A refers to Nexus 4, B refers to Nexus 5 and C refers to Moto G. Each chart refers to an experiment conducted with one of the three phones, starting with 100% battery for the phone. The x-axis plots the time in number of hours elapsed since the beginning of the experiment. Y-axis plots the corresponding battery charge as it decreases with time. The legend shows the scan intervals and the number of beacons in the vicinity of the phone. For example, “scan 1.1 sleep 9.9 10 beacons” in the legend would mean the phone spends 1.1 seconds scanning for Bluetooth LE, and then spend the remaining 9.9 seconds idling, and there are 10 beacons nearby. 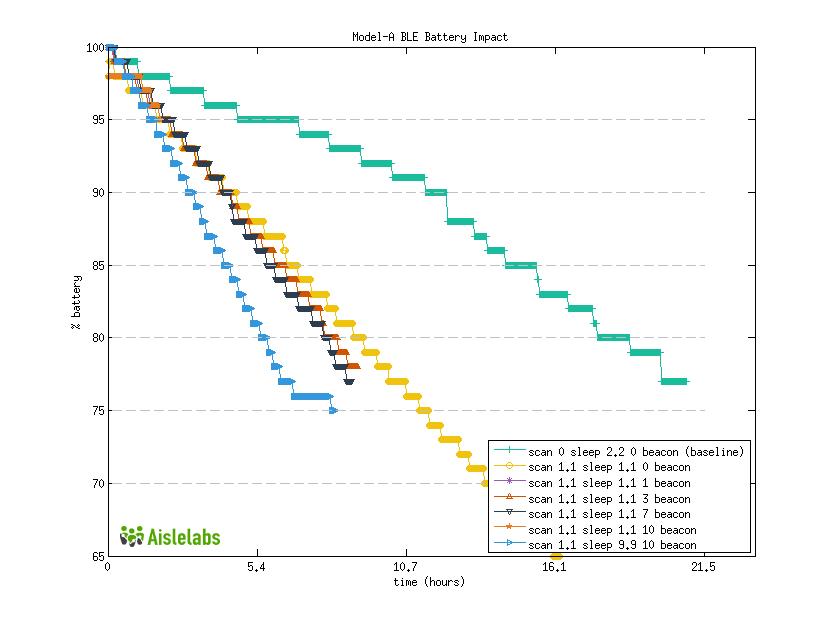 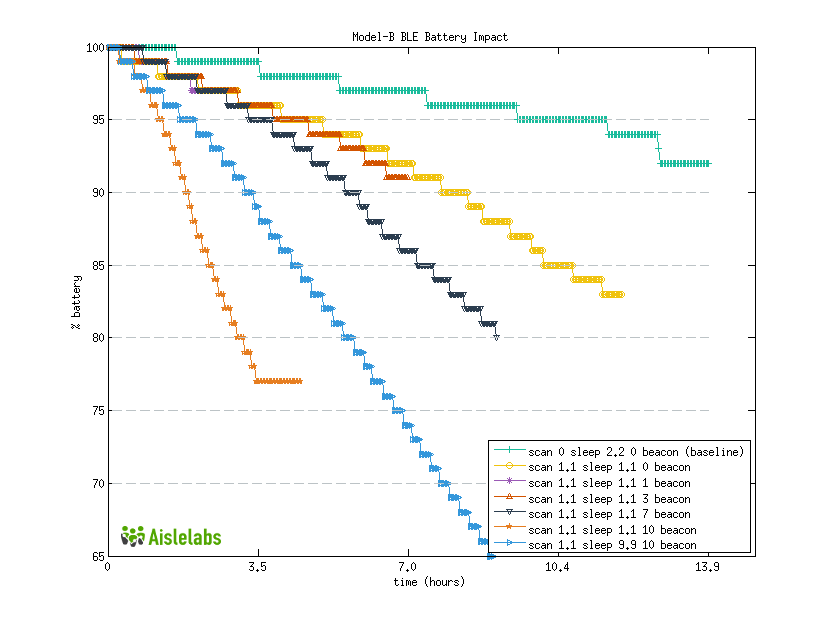 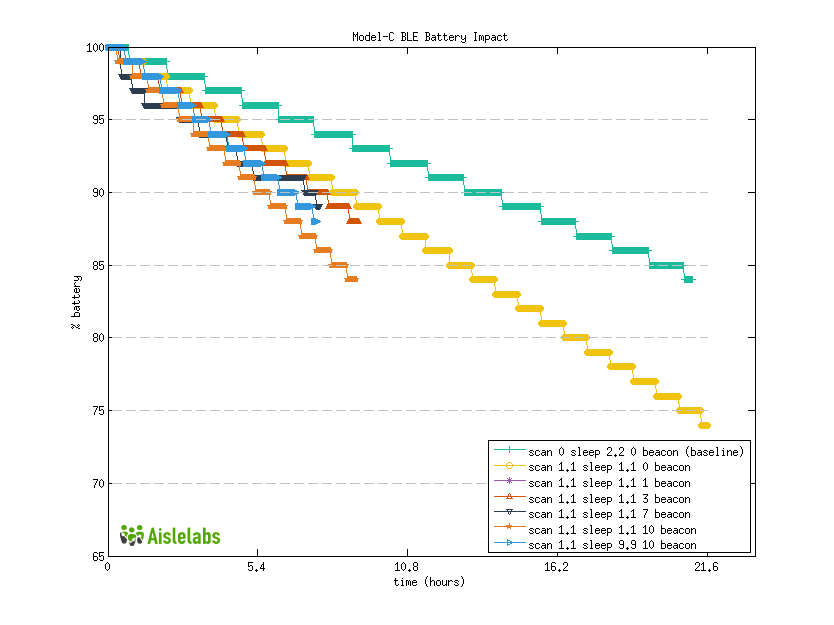 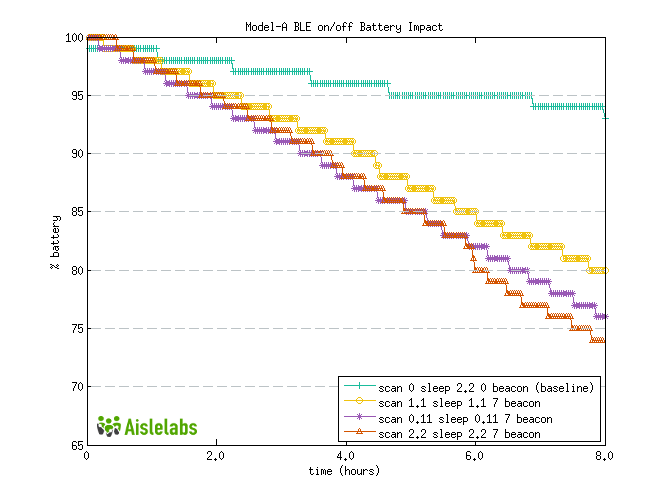 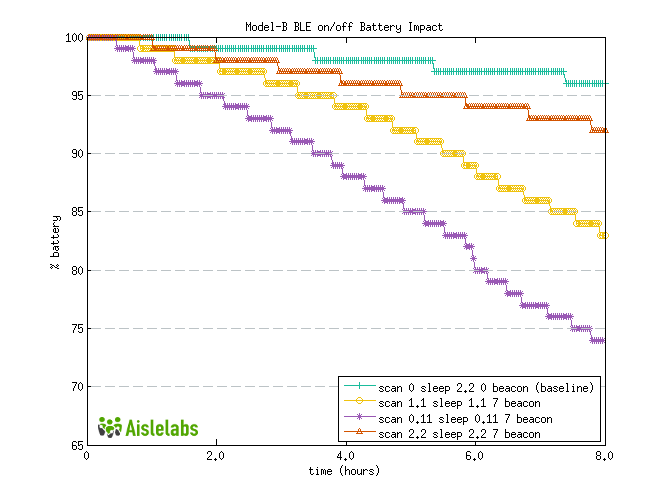 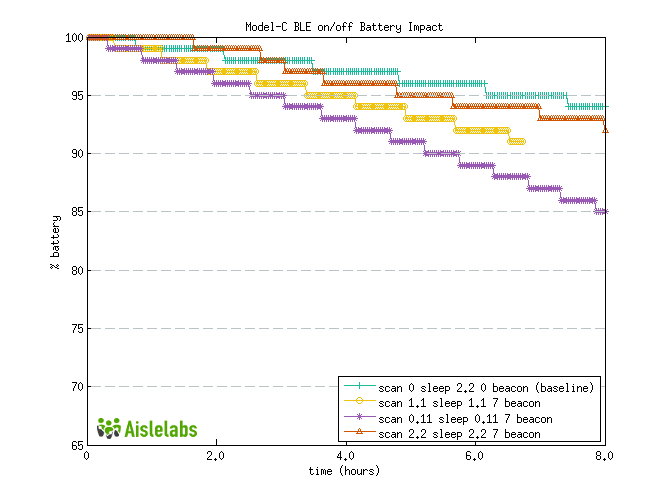 We have conducted a first study on the battery impact of beacons on Android handsets. This is the first of a series of studies, and we will soon be releasing more comprehensive studies covering more phones (including tablets, iPhones and iPads) and beacon hardware.

The promise of beacons to revolutionize applications hinges partly on their minimal energy impact. With these experiments we conclude that newer handsets are optimized for Bluetooth LE and iBeacons and battery impact is minimal even under high stress conditions. This is only going to improve as newer chipsets become available later this year.

This work by Aislelabs is licensed under a Creative Commons Attribution 4.0 International License.